The phrase “21st-century skills” sounds like we’re describing some sort of futuristic skillset like piloting spaceships or building robots. It’s actually nothing like that all. It doesn’t even describe skills in modern technology like smartphones or electric cars.

The truth is that 21st-century skills describe universal skills for success in today’s age, no matter the career or field. They allow one to work effectively with colleagues, create innovative ideas, and to solve problems. Jobs that don’t require these skills are those most in danger of disappearing to outsourcing or automation. At the same time, future jobs that we can’t predict keep appearing for which we have little ability to equip ourselves in the present. 21st-century skills are key to preparing for this unknown future, because no matter what the specifics of the job, these skills will cause a person to shine. And really, now that we’re in the 21st century, they could just as easily be thought of as “successful human” skills.

There’s no official list, but there are a few 21st-century skills that pop up again and again among educators, funders and learning designers. There are the “Big C’s”: creativity, communication, collaboration, and critical thinking. Others such as tenacity, grit, agency, adaptability, empathy, and socio-emotional skills often appear on more exhaustive lists. They exist independently of discipline or specialization, yet are still crucial to success in a global, connected world.

In the G4C Student Challenge, which ran as a pilot in New York City public schools and has expanded to three cities in 2016, we pay special attention to the 21st-century skills of participating students as they develop social impact games. We work with the teachers running game design courses in their schools to implement a series of rubrics to evaluate student improvement in core skill areas, from the perspective of both the teacher and student.

We developed this s assessment framework with the hypothesis that participating in game design around social impact issues would promote growth in 21st-century Skills.

Each teacher is provided with a rubric for rating each of their game design students on a 1-4 scale in eight specific skills: creativity, communication, collaboration, tenacity, agency, empathy, adaptability, and socio-emotional. They complete this rubric once at the beginning of the challenge and again at the end. Then, we take the average of the student group each time to determine if there was overall growth in any of the skills.

The results have been promising: data collected during our 2015–2016 NYC Student Challenge showed increase in every single skill, with some achieving 10-15% growth! This is exciting evidence that designing games for change is very beneficial to student growth in these key skills. Check out the data for yourself:

We will be implementing this assessment framework again in 2016–2017 across all three Challenge cities—NYC, Pittsburgh and Dallas—with over 60 teachers. The results will be shared publicly in summer 2017. We’re very much anticipating the upcoming data on this year’s participants!

Brendon is Senior Game Designer at Institute of Play. 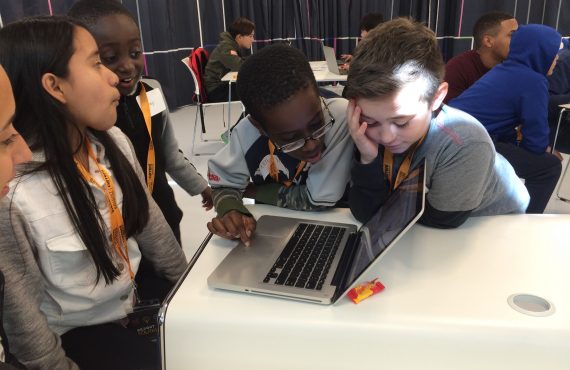 Moveable Game Jams Hosted with HIVE Partners in the Bronx...