PLAY THESE GAMES ABOUT 'LOCAL STORIES & IMMIGRANT VOICES' AND GET INSPIRED TO CREATE AN ORIGINAL GAME ON THE TOPIC! 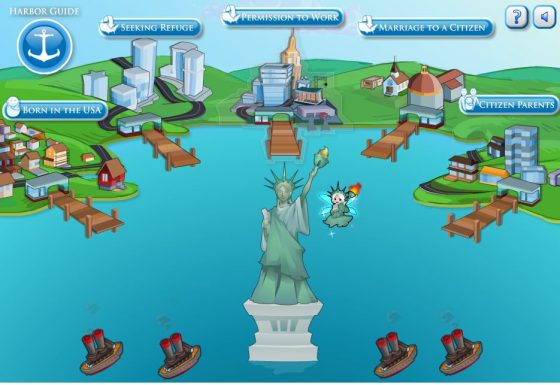 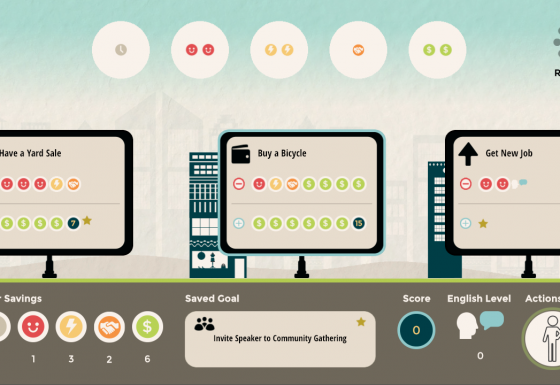 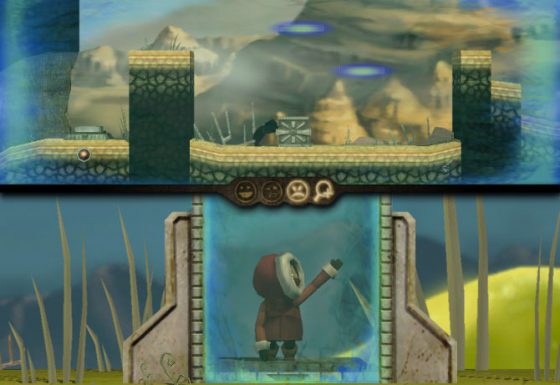 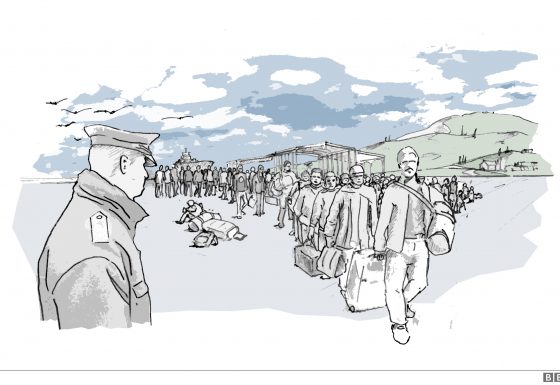 Since the 17th century immigrants and migrants have created and shaped communities across the United States. The first Europeans came to the U.S. in search of religious or political freedom or they arrived under labor contracts, while Africans were forcibly caught in the Atlantic slave trade. Later, immigrants and migrants arrived here, fleeing famine, poverty, civil unrest, and war, or they were attracted by the opportunity to improve their work or living conditions.

There has never been a time when immigration or migration stopped. And each succeeding group of newcomers changed the communities they settled in. Your city is home to thousands of immigrants, all of whom, like people in the past, have stories to share. Maybe your neighbors or family members arrived in the United States. Think about what the experience as an immigrant must have been like now or in any period in history. Was it hard to find your way around the city streets? What was it like attending school or making friends? This theme invites you to create a game about the immigrant experiences in your city.

Choose one of the below prompts for your game, or develop your own game concept:

Voices of Mixed Heritage: Crossing Borders, Bridging Generations is an interdisciplinary curriculum designed for grades 6–12. Students and educators engage with the topic of mixed heritage and identity in the United States from the mid-19th century to the present. Students investigate the voices and representation of those who identify as mixed-heritage individuals through oral histories, archival primary sources, popular culture references, and contextualizing secondary sources. This allows them to unpack complex political concepts such as race, racism, identity, equity, and self-determination.

What does the mixed heritage lens offer to a unit on immigration?

The 1965 Immigration Act dramatically changed immigration policies in America. The Act eliminated the national quotas system that privileged Europeans and replaced it with a system based on family reunification and skilled laborers. As a result, immigration to the US from Asia and Latin America greatly increased. While this has contributed to a demographic trend away from white Americans being the majority, (the Pew Research Center reports that in 2015 the number of white babies was surpassed by the number of babies of color) systems of white supremacy and structural racism remain entrenched in the country’s political, social, and economic spheres.

And yet, “As the US population became more racially diverse, there was more opportunity for Americans to meet (and fall in love with) people from other races. Immigrant destinations like New York City, tend to have more intermarriage as a result of having more racial diversity,” as sociologist Michael Rosenfeld has pointed out.

The topic of mixed heritage can push our students to see how and where boundaries of race and nationality can become porous and where they remain fixed, and to normalize and honor the experiences of a growing number of Americans who cross cultural and national borders on a regular basis.

The entire curriculum is viewable here as a PDF:

Some sections of the curriculum are especially applicable to this project:

The Census case study sources engage students in an exploration of how our country has viewed mixed heritage over time. It asks students to consider why we sort people based on racial categories, and if they are even accurate? And what kind of emotions arise when people discuss race, and why? Students then examine how the US Census has evolved from 1880, taking note of official efforts to sort and categorize people based on racial identity, and the impact immigration has had on conceptions and articulations of racial and ethnic categories.

Pages 30 – 66 of the Voices of Mixed Heritage Curriculum.

This case study engages students in an exploration of how laws and mores (cultural expectations and behaviors) regarding mixed heritage marriage have evolved in the United States and how they have influenced our views about mixed heritage over time. It asks students to consider how families evolve and shift over time, and how that is recorded in the census. It features census data about several marriages in Manhattan’s Five Points neighborhood between Irish immigrant women and African American men who worked together in domestic service jobs.

Pages 67 – 112 of the Voices of Mixed Heritage Curriculum.

The “Post-Racial” case study engages students in a challenging exploration of the role of race in contemporary life in the United States. It asks students to engage with material for and against the concept of “post-racial”, and formulate their own opinion as to the phrase’s accuracy at describing their (the students’) generation.

Crossing Borders, Bridging Generations collected many oral histories of people of mixed heritage. Their reflections on their experiences are valuable sources for understanding how categories of racial identification have reflections on our personal lives. The full list of Oral Histories are located here: http://cbbg.brooklynhistory.org/listen All of the transcripts are fully text searchable for key phrases.

Asha Sundararaman was born in Palo Alto, California. She grew up in California, Indiana, Canada, and Nigeria. Her father, an immigrant from India, worked for Chevron and was relocated several times during Sundararaman’s childhood. Sundararaman attended Wellesley College in Massachusetts, where she was an active member in Fusion, an organization for mixed race students. She attended graduate school in London, England, and also lived in India and Angola. She later moved to Park Slope, Brooklyn, and worked as a volunteer coordinator for Orbis International, an organization that works to prevent blindness in developing countries.

Caroline Fermin was born in Houston, Texas and raised in New Orleans, Louisiana. Her mother, a white Southerner, stayed at home throughout Fermin’s childhood. Her father, an immigrant from the Dominican Republic, was a tenured professor at Tulane University in New Orleans. Fermin attended the New Orleans Center for the Creative Arts and received a B.F.A. in dance from the Juilliard School in New York City. She later lived in Fort Greene, Brooklyn and worked as a professional dancer and dance teacher.

“When we did the census a few times, she would be on the phone with them and they’d be like, ‘Well, whatever language you speak at home is what race you are.’ My mom would be furious. Having to choose I felt like was the hardest part.”

Sebastian Fargeat was born and raised in Lyon, France. He attended Université Jean Moulin in Lyon, France for a graduate degree in International Security Policies. After moving to New York City, he worked as a manager in the tourism industry.

Vanessa Snowden was born in Caracas, Venezuela and grew up in Buffalo, New York. She attended Princeton University in New Jersey and received a B.A. in English. After college, she worked as an au pair and an English teaching assistant in Lyon, France. She later moved to New York City and worked as a middle and high school English teacher.

“When I got into Princeton, suddenly everyone who thought it was cool that I was from Venezuela attributed the fact that I got in there to the fact that I was Hispanic. And so that became really difficult for me, because I thought I had earned it, and suddenly, all these kind of weird feelings start coming up around my heritage, because I only got where I was getting to because of this, according to my peers.

Sergia Andrade grew up in Brooklyn, New York, and in France. Her parents emigrated to France from the West African island Cape Verde and then later moved to Brooklyn. Her mother’s family was an aristocratic Portuguese colonial family in Cape Verde, while her father’s family was descended from black African slaves. Through genetic testing, Sergia also discovered she has Jewish ancestry.

Discover the vital role the Spanish-speaking world played and continues to play in New York City’s trade, politics and culture through investigating artifacts and artwork from the exhibition Nueva York: 1613–1945, organized in collaboration with El Museo del Barrio. These materials include a teachers’ guide, primary sources, Life Stories, and a visual arts unit.

What does it means to be an American? Chinese American: Exclusion/Inclusion explores this question as it chronicles the long and complex history of Chinese Americans in the United States. The exhibition and educational materials highlight more than 200 years of stories from across the nation, many of which connect directly with some of the most compelling themes in American history: immigration, American identity, westward expansion, racism and nativism, the importance of work and workers, and the power of individuals’ stories.

Seneca Village was Manhattan’s first significant community of African American property owners. The village was razed for the construction of Central Park and its history has been largely forgotten. Uncover the story of this 19th century village of free blacks and Irish and German immigrants using the primary source documents provided in this curriculum guide. Divided into seven parts, the guide is arranged so that teachers may choose which kinds of primary sources they wish to approach and in what order. The guide also includes lesson introductions, questions for classroom discussion, a list of key words, and suggested activities. http://www.nyhistory.org/sites/default/files/Seneca_Village_NYHS.pdf

New York was the capital of American slavery for more than two centuries. These materials explore slavery in New York from the 1600s to 1827, when slavery was legally abolished in New York State. They focus on the rediscovery of the collective and personal experiences of Africans and African Americans in New York City. These curriculum materials include a teache’r guide, charts and graphs, primary sources, maps, and Life Stories.

Slavery ended in New York State in 1827, yet this victory did not sever the city’s connections to enslaved labor. New York City capitalized on the expanding trade in southern cotton and sugar to become the leading American port, a global financial center, and a hotbed of pro-slavery politics. At the same time, it nurtured a determined anti-slavery movement. New York Divided explores the turbulent half-century of the city’s history with southern slavery. These materials include a teachers’ guide, primary sources and Life Stories.

This website and curriculum guide introduces the life and work of Camilo José Vergara. Photographing urban communities in American cities, Vergara creates a visual portrait of urban decline and renewal over a span of 40 years, sharing a unique perspective on our relationship to the built environment. Activities in this resource provide educators and students with an opportunity to examine the connections between an individual’s personal story and the way that story can shape and influence one’s life work. We invite you to participate in Vergara’s Harlem and share these images and Vergara’s story with your students. http://vergara.nyhistory.org/

The Armory Show at 100: Modern Art and Revolution

In 1913, the International Exhibition of Modern Art (nicknamed the Armory Show) came to New York and forever changed the way Americans thought about art. These materials place this epic exhibit in its historical context in five units: Observing the Urban American Scene; The Spirit of Modernism: A New Way of Looking; The Spirit of the Painting: Expressive Use of Color, Line, and Shape; Modernism in New York, 1913; and Armory Art in the Social Studies Classroom. In total, they contain 40 primary sources, including reproductions of some of the most iconic works from the 1913 Armory Show, as well as documents, photographs, film, music, and ephemera from the time; life stories of influential figures; lesson ideas; and more.

Heaven Will Protect the Working Girl: Immigrant Women in the Turn-of-the-Century City

Heaven Will Protect the Working Girl: Immigrant Women in the Turn-of-the-Century City – a 30 minute documentary on DVD

History Matters: The U.S. Survey Course on the Web

Over 140 primary documents on immigration including “They Are Mostly All Foreigners on Strike”: Joseph Fish Speaks on the 1919 Steel Strike — http://historymatters.gmu.edu/d/7 (see bottom of page for additional primary documents on the 1919 steel strike) oral histories such as “Working for the Triangle Shirtwaist Company” by Pauline Newman — http://historymatters.gmu.edu/d/178 Use “Advanced Search” and Select Immigration/Ethnicity and “ Many Pasts”