by Ryan Coon and Arielle Evans

We’ve hosted a couple of Game Jams in Pittsburgh as part of our local Student Challenge. The Game Jams have been a great way to expand participation in the Student Challenge beyond the classrooms of teachers who have gone through Games for Change training. 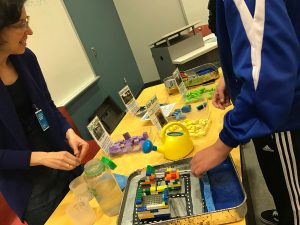 Our goal for the Game Jams was to provide young people with many points of entry, so whether they wanted to pop in to check things out, play some games and hang out with their friends, or really dig into game design technology, they would find something fun to do at the Game Jam.

To help create a welcoming space for all, we brought in a diverse array of programming partners: Educators from nearby West Liberty University offered augmented reality activities that combined art-making with mobile apps on tablets, City of Play brought a mix of classic and contemporary tabletop and physical games, and each of our theme partners provided hands-on learning activities from their in-house educators. And of course, we set up banks of Chromebooks and laptops where students learned how to use Scratch and Gamestar Mechanic to design video games about the G4C Student Challenge themes (Future Communities, Climate Change and Local Stories and Immigrant Voices).

We held our Climate Change Game Jam on Saturday, February 11 at the Carnegie Museum of Natural History in Pittsburgh’s Oakland neighborhood. We hosted more than 30 students who had the opportunity to go on a tour of the museum’s interactive earth science exhibits and had a chance to play some current Climate Change video games to inspire their own thinking. Museum educators led a variety of hands-on activities to help students understand the complexities of climate science and the possibilities for local solutions in approachable, tangible ways.

On Saturday, February 25, we hosted our Local Stories & Immigrant Voices Game Jam at the Senator John Heinz History Center in Pittsburgh’s Strip District. This Game Jam had 36 students in attendance, with learners ranging from elementary to high school age, along with their parents and guardians. 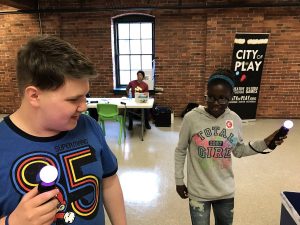 Game Jammers engaged in a variety of activities. They colored flags and maps and used QuiverVision on iPads to augment them in 3D with West Liberty University. They learned about Italian immigration to the neighborhood (and then took a tour of the museum’s related artifacts and special collections) with the Heinz History Center staff. Jammers also played tabletop and physical games with City of Play, learned about Inuit history and World War I on immersive tablet games, and used Scratch and Gamestar Mechanic to play games made by other kids and start designing their own games.

Several of the high school-aged students conducted research for their game by interviewing Heinz History Center staff about local immigration stories. Younger students enjoyed playing Joust, a no-graphics, digitally-enabled playground game that uses Playstation 4 motion controllers, and then learned a version of the same game that they can play at home using household objects. Towards the end of the afternoon, the whole group came together to play a round of game-themed trivia bingo.

Finally, the Future Communities Game Jam was hosted in Pittsburgh on Friday, March 31, in partnership with the City of Pittsburgh’s Department of Innovation and Performance. Held on the first day of the city’s Inclusive Innovation Week, nearly 50 students explored how local Pittsburghers can harness data to help shape the future of their city. The game jams invited students to participate in the Student Challenge program, and resulted in over 200 students learning new ways to make games for good!