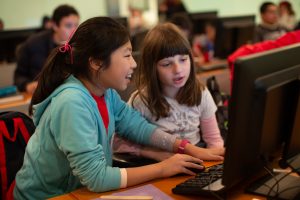 How does designing and developing impact games affect the development of key 21st-Century Skills in students? This is the key question we seek to answer in the assessment portion of the G4C Student Challenge program. Now in its sixth year, this program has provided increasingly solid evidence that students do develop these skills as they create their games for the Student Challenge!

What are 21st-Century Skills?

The term “21st-Century Skills” was coined around the turn of the millennium in response to a world rapidly transforming from advances in technology and communication. The term  describes a set of skills that young people will need to succeed in a highly unpredictable future, no matter what the future holds.

Despite the futuristic-sounding premise, these skills don’t describe literacy in specific forms of technology, which come along and become obsolete in the blink of an eye. Instead, they refer to a variety of creative and interpersonal skills which can universally serve a young person in whatever career or life pathway they choose.

In the Games for Change Student Challenge, we focus specifically on the following seven skills, chosen for their applicability to game design and their universality across various lists of 21st-Century Skills:

In order to measure these seven skills, we rely on the ability of our students and teachers to evaluate their progress and report it back to us through a set of rubrics and surveys. Here’s an example of a skill as described in the teacher rubric:

By breaking the skills down into levels, we can assign a numerical value to each rubric submission by teachers and take an average of all the students at the beginning and end of the program. In addition, we ask teachers to evaluate students inside and outside of their game design classes, so we can compare the two sets of data and assign a probable relationship between these skills and the specific activities they do in the Student Challenge.

Now with five years of data to back up this answer, we have seen a promising relationship between game design and student development of 21st-Century Skills. As reported by teachers, students saw an average 11% growth in game design classes in the targeted skills, while in non-game classes the growth averaged 5%.

Similarly, in the student-facing surveys, we asked kids directly: how do they feel their classes help them practice these skills? Students indicated both at the beginning and end of the program their Student Challenge game design classes helped them more with these skills than non-game classes. In addition, that preference grew stronger over the course of the program!

What it’s All About

One last thing we ask of teachers in the rubric is to share stories and testimonials of their students’ experiences in developing their 21st-Century skills. This example is one which truly captures the spirit of this program:

“This student grew a lot in this class especially from an empathy and socio-emotional perspective. He gained a lot of confidence and completed two full length games by the end of the year. Although he chose to work alone, he did collaborate with different student groups along the way and recognized that the speed and quality of his work may have increased exponentially had he been with the right partners.”